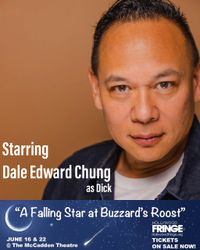 A Falling Star at Buzzard’s Roost: A Rockabilly Musical

A Falling Star at Buzzard’s Roost is a light-hearted musical comedy that follows hard-touring retro-Rockabilly band stuck in a kitschy Alabama Drive-In Diner gets transported back in time to 1954. The reluctant time-travelers find love, learn life lessons and sing amazing songs as they struggle to get back to present day.

Starring and Directed by Maureen Davis and Kacee Clanton

Davis is the lead singer of M&M5, The Flutterbies and original "Sleeping Beauty" in Broadway's "Into the Woods w/Bernadette Peters. Maureen also wrote all the music.

Clanton's credits include starring in Broadway's "A Night with Janis Joplin", and toured with Joe Cocker, Luis Miguel, in addition to being lead singer of Big Brother & the Holding Company.

Michael Monroe Goodman played both Elvis and Johnny Cash on Broadway in "Million Dollar Quartet". He is also lead singer of the Honky Tonk Ninja's.

Nathan Smythe is a DJ / Emcee and Voice Actor. He has performed at Disneyland, the Wiltern Theatre, Clifton's, The Tiki Oasis Festival and Viva Las Vegas. He was the voice of the White Castle hamburger chain.

Amièe Conn, actor/singer/model is a graduate of the American Music & Dramatic Arts Academy. She has appeared in "American Crime Story", "Don't Trust the B in Apartment 23", My Crazy Ex, and "La La Land".

Dale Edward Chung is a Latin Grammy nominated percussionist, award winning music producer, composer, voice/film actor, and filmmaker. He was a member of Con Funk Shun for 13 years touring the world and performing on their 2015 Billboard Top 20 album “More Than Love”, as well as, heads up his own band as D. Edward.